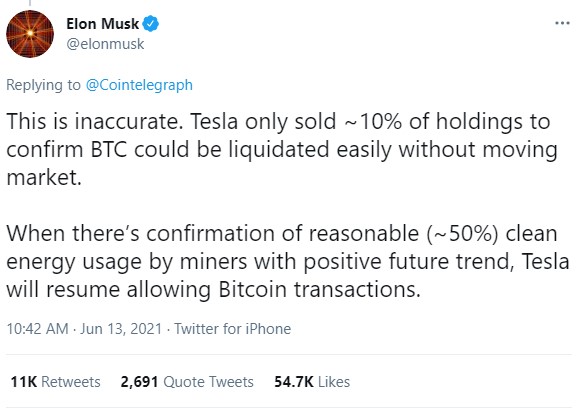 The ‘Dogefather’ Elon Musk  delivered his ultimatum on Sunday, essentially.

It’s pretty easy to see why. When the goal of your business is to reduce fossil fuel consumption, it’s important to take a lead. Elon Musk’s tweets about Bitcoin are the all-time best example of just how much power he holds.

There are many things we can admire Elon Musk for, and chief among them is this move. Regardless of what our personal opinion is, he purposely took a risk in order to take a stance.

Also, he’s not wrong. It is stated that Bitcoin production (or mining) is estimated to generate 22 to almost 23 million metric tons of carbon dioxide emissions per year. According to this report, that’s somewhere between the amounts produced every year by Jordan and Sri Lanka.

So it makes sense why the owner of an electric car company, which was made to cut down emissions, would want to stop receiving payments in something that causes such emissions.

While thinking about that can give us a headache, it’s important to realize one important thing: This is good news.

After all, when was the last time a billionaire actually did something about the environment? Just like Elon’s support for Doge, maybe it’s part of a longer game, one that is nestled in Musk’s future plans with renewable energy. Perhaps his wrestling with the price of Bitcoin, causing so many others to become wannabe crypto bull wranglers has a deeper purpose… 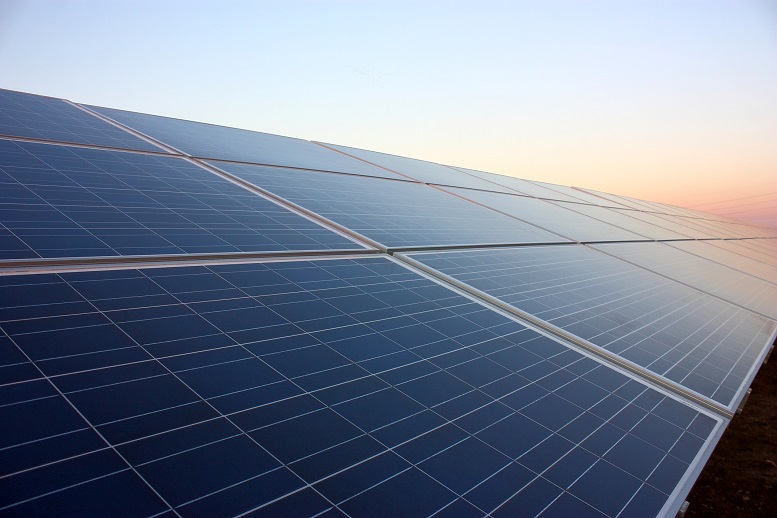 Seeing the fallout from Elon Musk’s tweets leads down a rabbit hole. Eventually, you discover his plan to build the world’s largest virtual power plant. Musk unveiled an ambitious plan for 2022 and beyond to power 50,000 homes in South Australia over four years with free solar panels and Tesla batteries. It is estimated that this will produce 20 percent of the entire state’s daily energy requirements. This could lower energy bills for the households involved by 30%.

What do lower energy bills mean? Increased savings, more consumer spending power, and a more efficient economy – especially in times of such staggering inflation. While this is great news in concept, so far, it’s going to be conducted in South Australia. Are we going to see more places getting the Magic Musk Energy Booster Shot?

Is it so farfetched to believe that Elon Musk’s tweets about crypto mining emissions might be to prepare for something bigger? Could we see a future tweet from Musk launching a sustainable-only  crypto mining company? Perhaps he will lobby with governments using his company’s products as leverage. It’s almost like he’s saying Be sustainable or else!

It’s similar to the old concept of having a monopoly on something, and offering it only to those who meet certain requirements for saidpurchase. So in essence, this makes Elon Musk the world’s first ‘Robinhood Baron’.

But hey, what about Lithium?

US-based auto manufacturers are going all in on EVs. The real fuel behind the world’s best electric cars like Tesla (NASDAQ:TSLA), Nio Inc (NYSE:NIO) ?

Even the fictional Robinhood wasn’t a complete saint (We’re talking about the story, not the trading platform made infamous after they vetoed retail investor’s positions in Gamestop Corp (NASDAQ:GME). The EV boom, Elon’s tweets and the crypto craze all over shadow the biggest and least-spoken-of elephant in the living room of modern history: Lithium.

The Lithium Triangle, an area spanning portions of Bolivia, Chile and Argenita contains more than half the world’s supply of metal under salt flats that make it look like an alien world. Miners drill a hole in the salt flats, then wait for brine to surface, and after 12-18 months extract filtered lithium carbonate. It’s cheap, effective, but uses 500,000 gallons of water per tonne of lithium mined.

In Chile’s Slar de Atacama, lithium mining consumed 65% of the area’s water supply. The farmers there relied on this. Not sure Elon can fix that with a tweet.

This leads us to another point… Could Elon Musk be cracking down on Bitcoin miners because of the damage the lithium boom is causing?

Elon Musk might be an easy scape goat, yet the need for lithium carbonate existed long before he was coding in his tiny apartment in San Diego.

Ultimately, the golden rule seems to be to follow the money. Dips in crypto like BTC can be a good thing, especially when it means more people get access to the crypto markets.

Elon Musk is completely right. By discouraging pollution from cryptomining, he sets a precedent for others to hopefully do the same.

Investors looking to diversify into standard markets can look to Lithium stocks as the EV boom continues to gain ground. Maybe TSLA (NASDAQ:TSLA) won’t be the first electric car sold for a cryptocurrency.