Ever since China strengthened the supervision of cryptocurrency mining and related trading, causing “fear, uncertainty, and doubt” (FUD) sentiment that has intensified among investors, Bitcoin (BTC) has been on the receiving end as its price continues to drop.

The number of BTC addresses holding more than 1,000 Bitcoins also plummeted, as acknowledged by Glassnode. The on-chain metrics provider explained:

The BTC mining crackdown happening in China has caused miners to sell their holdings to attain the needed capital to establish new facilities in other nations.

“Chinese miners are being forced to either shut shop or move shop, the result has been that they are selling Bitcoin to both exit the market and recoup investments or to fund their move to greener pastures like Kazakhstan or Texas.” 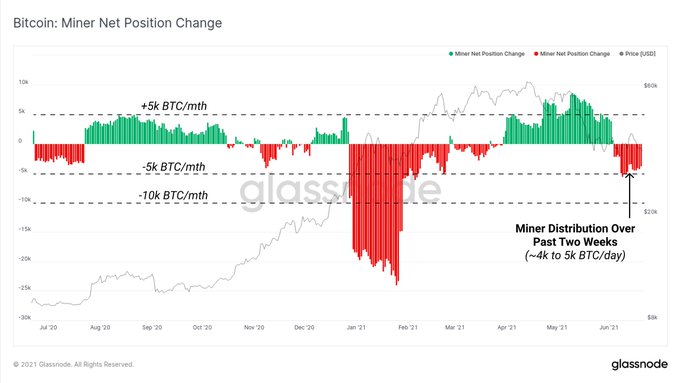 Davis added that a lot of BTC mining machines were being switched off, which was detrimental in the short term but good in the long term.

A bear market is near?

According to CryptoQuant CEO Ki-Young Ju, the Bitcoin bear market might be confirmed by the fact that many whales are sending their holdings to crypto exchanges. He pointed out:

“I hate to say this, but it seems like the Bitcoin bear market confirmed. Too many whales are sending BTC to exchanges.”

With leading American business intelligence firm MicroStrategy accumulating more Bitcoin holdings to a record-high of 105,085 BTC, it remains to be seen whether such actions by institutional investors will prompt the much-needed upward momentum in the Bitcoin market.