Home Crypto News The Future of BTC? ”Until There’s Clarity, There’s Going to Be Chaos.”

BTC’s price movements over the past several weeks have had many critics making doomsday claims.

“The crypto marketplace is going to be an epic, long-form rollercoaster ride for investors, and we’re just getting started. The steepest curves and the wildest climbs are still to come.”

“Why did the market drop? When there’s an absence of evidence–or when the evidence is unclear or incomplete–investors are forced to connect the dots on their own,” she continued. “But everyone connects the dots a little differently, and these connections are greatly influenced by our personal biases.” And of course, “The crypto market is no exception.”

Let’s review: the most popular narrative behind Bitcoin’s price drop points to two pieces of news that hit the crypto scene in mid-May: firstly, that Tesla would no longer be accepting Bitcoin as payment for its famous electric vehicles, and secondly, that the Chinese government would be taking further steps to crack down on crypto–specifically, that it would be barring banks and payment companies from working with crypto platforms.

Analysts have also pointed out that both of these events seem to have triggered a “domino effect” of cascading liquidations. More than $12 billion in leveraged positions spread across over 800,000 accounts was liquidated in the price crash that followed the news of China’s crackdown and Tesla’s step back from BTC payments.

After days of death drops, the price of BTC finally seemed to stabilize between $34K-$38K from May 24th to June 7th. However, Bitcoin took another hit on Monday night, suddenly dropping 9 percent to $31,295.

Since then, BTC has recovered once again to $34K. Still, the drop has analysts wondering: could BTC retest $30K? If so, what would happen next? And what caused the drop in the first place?

Is the perception of BTC shifting?

Harriet Chan, the co-founder of software development firm CocoFinder, told Finance Magnates that “The ‘sudden’ drop in the value of BTC is actually a ripple effect of the criticism it has been getting in recent times about how green and sustainable it is.”

“Before, BTC was [seen as] a safe haven for many that wanted an alternative store of value for their money,” Harriet said. However, “it is now coming under strict criticism, especially over concerns about power consumption and its link to various criminal activities.”

Harriet also pointed to another hit to Bitcoin’s public image–”it is the subject of a ransomware demand in the US,” she said, increasingly the power of the narrative that Bitcoin is “linked to crime and terrorism.” On June 8th, Reuters reported that Colonial Pipeline paid $5 million to regain access to hacked systems that were causing massive shortages at gas stations on the eastern coast of the United States.

“BTC dropping below $30k is not as far-fetched as it used to be.”

As Bitcoin continues to lose momentum under the $40K mark, “BTC dropping below $30k is not as far-fetched as it used to be,” Harriet Chan said. “At this point, it is actually likelier than ever that it will drop below that point, and recovery might be an even more dream-like idea.”

BTC’s price could be in particularly bad shape if another negative news event breaks for the coin. “If BTC comes up in another crime scandal, its road to below $30K is as sure as done,” Harriet said, adding that “exactly how low it could go is not easy to determine.”

Doug Schwenk, Chairman of Digital Asset Research (DAR) told Finance Magnates that “more minor negative news stories could add to the pressure and given how far we are above last year’s levels, it is conceivable that below $30k happens.

Streaming NDFs, EM Currencies and Cryptos: The Gap in the Market Nobody SawGo to article >>

”A negative regulatory story, such as a ban on BTC from a major economy, would probably be the most damaging.”

However, Schwenk does believe that a regulatory slam could send the price of BTC hurtling toward the ground: “A negative regulatory story, such as a ban on BTC from a major economy, would probably be the most damaging cause absent a security bug or other catastrophic failure of the network.,” he said.

But is regulation likely to come for BTC anytime soon? “It’s hard to pinpoint one reason, but speculation and headlines in the news can cause massive swings in the valuation of cryptocurrency, like Bitcoin.”

Mark Henry, founder and CEO of  Alloy Wealth Management, told Finance Magnates that it’s not impossible. “Most recently, we saw the price go down after news investigators were able to recover about half of the ransom collected by hackers who attacked the Key East Coast pipeline in May. The involvement of the U.S. government shows assets can be taken back, which is causing fear of more regulations.”

“One of [investors’] biggest fears is about how cryptocurrency, like Bitcoin, will be regulated. Bitcoin is going to fluctuate. We could see it go well above $60k again this year, then drop and do it all over again.”

Still, he added, “Bitcoin is here to stay–be mindful that it is still up 14% from the start of the year.” 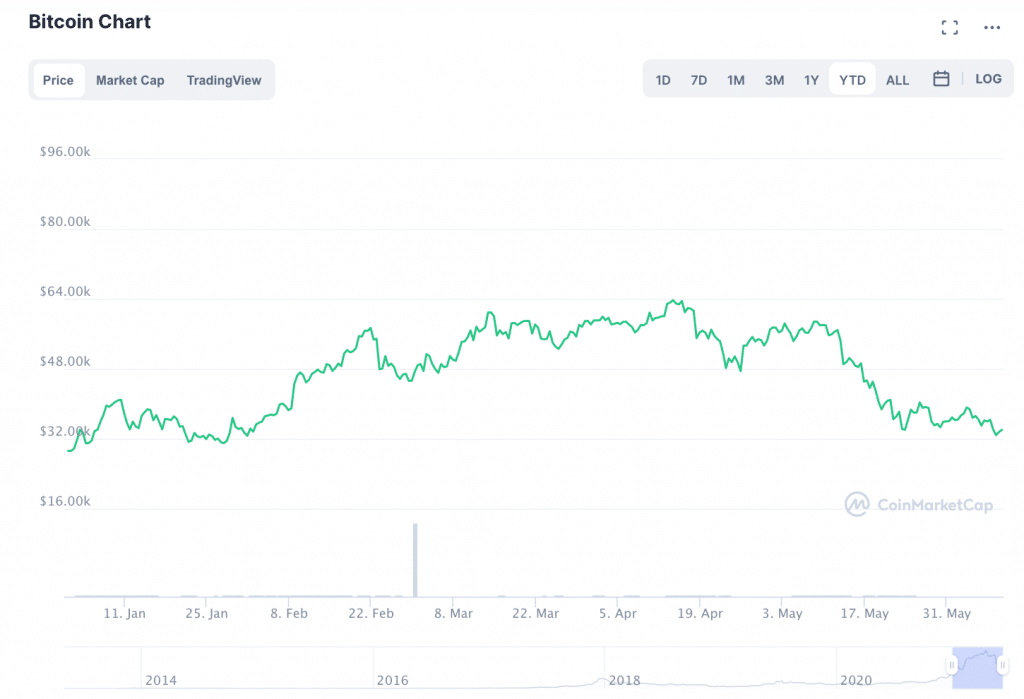 However, while Bitcoin may be here to stay, the events of the past month may have an important influence on the way that Bitcoin is used and perceived over the longer term.

“Currently, institutional investors that were looking to BTC as the tool to navigate the post-pandemic era are changing their opinion on that,” Cocofinder’s Harriet Chan said. “The effect of this is that other investors are also buying into the idea that BTC is very volatile and that won’t change soon.”

Mark Henry added that “The long-term investor who understands volatility and isn’t new to the investment world knows we are going to see the price fluctuate.”

“It may lose standing with the investor who doesn’t understand the markets and will panic when prices drop.”

”Until there’s clarity, there’s going to be chaos.”

In any case, the bottom line is that when it comes to Bitcoin, there are a lot of unknowns–as Monica Eaton-Cardone said, “we’re just getting started.”

“We’re still waiting to see if crypto will become an internationally accepted, ubiquitous presence, or a niche payment tool of dubious utility and/or legality,” Monica explained. “We’re still waiting for that seminal, paradigm-shattering moment when we’ll know for sure. So, in the meantime, we overanalyze and overemphasize every last bit of minutia, and that’s what’s triggering so much volatility. Until there’s clarity, there’s going to be chaos.”

“The crypto true-believers won’t be going away. They’re in it for the long haul. But until there’s long-term clarity, the crypto marketplace will continue to attract a large number of speculators who will come and go at various points.”

“Not everyone will have the stomach for the ride. This will exasperate the drops, and elevate the peaks. I can’t tell you how the crypto rollercoaster will end in 2021–but I can guarantee you, it’s going to be a helluva ride.”