Bitcoin has fallen almost US$10,000 since June 15. Broader crypto markets are taking a horrific beating at the moment. The sides have been taken and battle lines have been drawn: It’s developing countries like El Salvador and Tanzania vs the World Bank. As these nations try to empower and free their people through blockchain, the regulators are trying to slow the process down.


Heavy Regulation was Bound to Happen

That’s not to say this is solely happening because some ancient institutions want to hold on to their power. The concerns of the World Bank and the IMF are legitimate. The regulators demonstrate a strong desire to mitigate the negative effects of decentral finance. Fraud, money laundering and financing of questionable activities are all massive concerns. Since October 2020, 7,000 investors reported losses totalling US$80-million according to the Federal Trade Comission. While trafficking and funding of terrorist organizations can be tracked when it involves banks, wire transfers or even cash, the process becomes much, much more difficult when it comes to cryptocurrencies.

The other Elephant in the room? The emissions from producing electricity required for Bitcoin mining. The majority of Bitcoin miners in the world are based in China, and now that the nation is banning cryptocurrencies, they have to find new places to set up shop. The bright side for the environment? China used 1,951 metric tons of oil equivalent in coal in 2019. This is a four-fold increase since 1990. In 2019, coal made up 57.7% of China’s total energy use.

This issue caused Elon Musk to stop selling Tesla (NASDAQ:TSLA) cars for Bitcoin. Citing the unsustainable energy consumption from Bitcoin mining, Elon’s tweet was a hard hit against Bitcoin’s market value in May. Bearish sentiment is taking hold and even big-time investor juggernauts like Mark Cuban are calling for additional regulation.

Environmental effects of crypto mining are now being felt, as the electricity used for mining comes from non-renewables in many high-density mining areas. It’s estimated that Bitcoin mining takes more energy annually than the entire nations of Argentina and Sweden. While this might seem bad, it could actually be a very big opportunity. 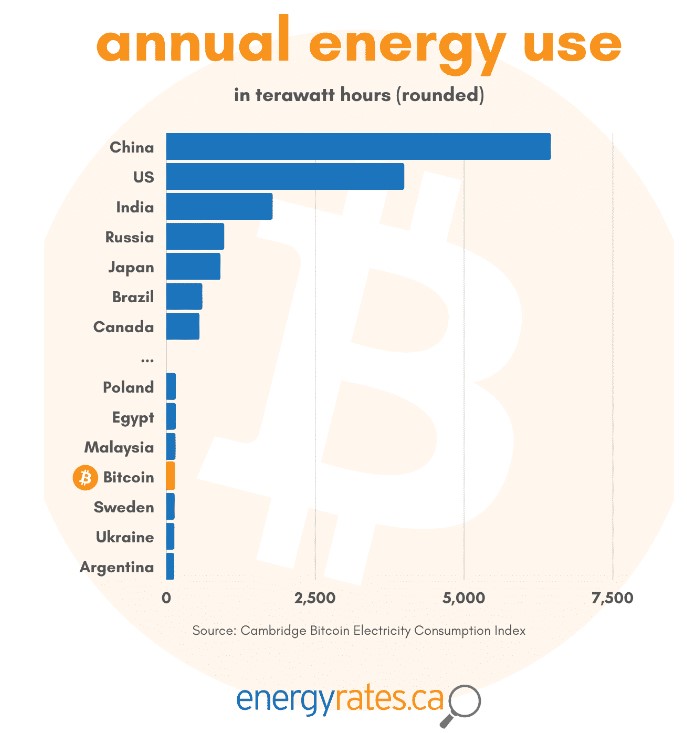 There is Hope: Bitfarms (NASDAQ:BITF)(TSXV:BITF) is Approved and Listed

It’s a Canadian Bitcoin mining company headquartered in Quebec.  The company operates five facilities in the province, and each one is powered by hydroelectricity. The company’s Sherbrooke facility is split into two sections and has a power capacity of 30mw. According to Bitfarm’s (NASDAQ:BITF)(TSXV:BITF) website, it costs an average of US$0.04/kWh to run the company’s operation on 100% hydroelectric power. At the moment the stock is trading on the NASDAQ at $3.96. It took a hit down 8% from its offering as a result of a massive cryptocurrency selloff.

Bitfarms (NASDAQ:BITF)(TSXV:BITF) is a company that is positioned at the right time and in the right place. Based on their initial success, it’s viable that the company’s vertically integrated business model will be revisited in rolling out Bitcoin mining sustainability into the future.

Imagine walking into a house for sale, but it’s on fire. Then say, “Oh, I can make this work?” That’s kind of what sustainable Bitcoin mining companies are doing. The crypto market is taking a huge hit, but as of this morning, it’s actually starting to ramp up! As China’s great Bitcoin migration continues, more and more miners are selling assets and will have to relocate to other countries. These new homes may not have the same view toward energy consumption as the People’s Republic, so this may mean a big push for environmental governance in Bitcoin mining from now on.

Independence Day, The Founders And Bitcoin

On July 4th, Use Bitcoin And Protect Freedom