As Bitcoin (BTC) continues consolidating between the $30k and $40k range for more than two months, the crypto community is waiting with bated breath to see its next move.

Nevertheless, the amount invested by institutions and corporates in the Bitcoin market is a small per cent of their total cash reserve.

“There are around 41,000 publicly traded companies globally, of which less than 2 dozen have taken positions in Bitcoin.”

“Publicly traded companies have around 10 trillion in cash reserves globally. Of that, around 6 billion has been invested into BTC as a way for companies to get off the sinking ship of fiat. Yes, just 0.06% of publicly-traded company cash has entered BTC.”

MicroStrategy, a leading American business intelligence firm, has been setting the ball rolling in the institutional BTC investment arena. For instance, it acquired additional 13,005 Bitcoins last month, bringing its total portfolio to 105,085 BTC.

Institutional investment has been the engine behind the recent remarkable bull run, which saw Bitcoin’s price rise from $20K in December 2020 to an all-time high (ATH) of $64.8K recorded in mid-April.

According to on-chain metrics provider Glassnode:

“Bitcoin funding rates on Perpetual Futures markets have been consistently negative since the sell-off in May. The last time funding rates remained negative for such an extended period of time was in Mar-Apr 2020.” 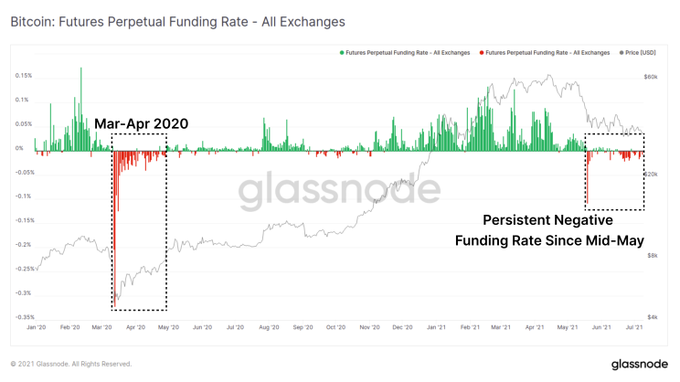 Despite the BTC funding rates remaining negative, new users entering the network are on a record-breaking move, as acknowledged by William Clemente III. The on-chain analyst pointed out: 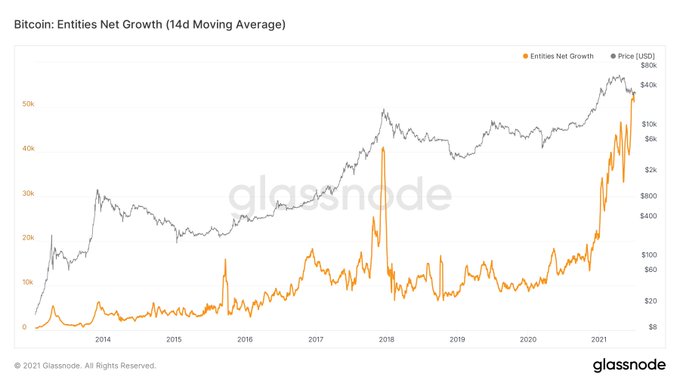 As Visa card holders’ crypto spending topped $1 billion in the first half of this year, it remains to be seen whether institutional investments will jumpstart the consolidating Bitcoin market.