Linux’s Hyperledger project, founded in 2015, has been advancing the open-source development of blockchains and related frameworks with the aim of improving the interoperability and reliability of blockchain technology for transactions in a variety of business sectors.

Brian Behlendorf, head of the Hyperledger project, has spent a career working in the open-source software community, fighting for the freedoms of decentralized and open digital platforms. He is widely known as a founder of the Apache Software Foundation and has spent the last four years working for Linux’s Hyperledger project to bring open source development to the blockchain community.

In an exclusive interview with Blockchain.News, Behlendorf shares his thoughts on the relationship between open-source software development and blockchain technology, and what the future may hold for cryptocurrency is a digital asset containing cryptographic protocols that make transactions secure and immutable. Crypto…”>cryptocurrencies and digital currencies.

Fascinated with computers and the internet, Behlendorf pursued a degree in computer science at UC Berkeley in 1991. The freedom and opportunity presented by those early days of the internet lured him in, and led him to dabble in web design and creation. Speaking of the internet of the time, Behlendorf said, “It was distinctly non-corporate – it was an engineer-led thing, and I kind of fell down the rabbit hole.”

Behlendorf discovered open-source software while fixing some back-end issues with Wired Magazine’s website, and from there, formed the Apache Web Server Project with like-minded collaborators, which eventually became the Apache Software Foundation, a decentralized and open-source community for developers with over 300 projects. Deciphering the source code of open-source software and improving upon it allowed for greater freedom in building new features without having to request permission from a centralized body.

From Wired Magazine, Behlendorf started a web design firm, Organic, that was bought out by Omnicom, as well as Collab.net, an early generation Github. He then worked on the Obama campaign in 2008, and in the White House from 2009-10, using open-source software standards to advance policy objectives like better health information sharing and analytics.

Frustrated with the commute to DC, he took a job in Geneva working for the World Economic Forum. Referring to that experience, Behlendorf remarked, “It was this nexus between how to build the kind of society we want and the kind of public sector we want with technology that fascinated me.”

Behlendorf grew concerned with the increasingly “dystopian and surveillance-oriented” culture in Silicon Valley, and became interested in the potential for blockchain technology to avert dependence on digital ecosystems relying on a few monolithic corporations. This feature of blockchain technology aligned with his own ideals, as he stated, “I believe that absolute power corrupts, and that premise is very much aligned with my interest in open source…blockchain technology represented a way to build information systems that are inherently more decentralized, and inherently resist the ability to leverage economies of scale to concentrate power.” 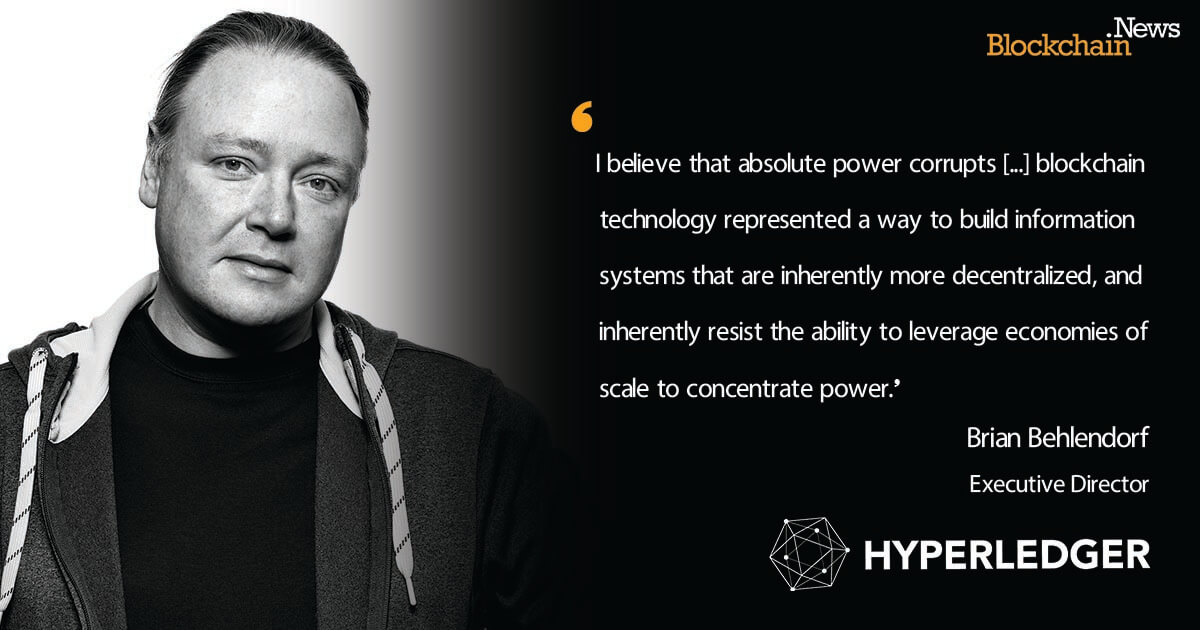 When the Linux Foundation launched Hyperledger in December of 2015, Behlendorf was immediately attracted: “I thought it was very smart because it drained the speculative financial instrument motivations out of the system and still left plenty of room for enterprise use and commercial development. It was intended to avoid the rampant speculation that turned software developers into hawkers of securities.” Jim Zemlin, head of the Linux Foundation, asked Behlendorf to come on board and run the initiative, which he’s been doing since June of 2016.

According to Behlendorf, the Linux Foundation had already been working within a range of innovative, open-source domains, such as cloud computing, telco, software-defined networking, and other kinds of financially self-sufficient frameworks, so it was a natural career progression to get involved with them.

His work has helped lead to the community development of over a dozen Hyperledger technologies. One of the key recent developments is Cactus, an open-source blockchain integration framework backed by Accenture and Fujitsu. The core component of the project is software-oriented, and aims to get engineers to work on the code of a variety of blockchain projects. Like Hyperledger Fabric or Besu, Cactus allows people to commercialize it, but is mainly an attempt to integrate several blockchains together.

Behlendorf explained, “Cactus is a collection of software that is used to build bridges between two different blockchain networks. Let’s say you have one network doing supply chain traceability and it’s built on Fabric, and another one managing payments between banks, and that’s running perhaps on Hyperledger Besu, or even on Quorum or Corda,  you want to be able to conduct transactions across these that benefit from the same degree of trustlessness and process enforcement without everybody having to be on the same blockchain. That consensus is achieved in both directions without requiring an intermediary network or mainnet.”

Assuming a world with the existence of many different blockchain networks, some designed for payments or identity, and some for more specific records, such as the supply chain for diamonds, the key question is how to integrate these networks to make peoples’ lives easier, and that is the problem Cactus aims to solve.

Hyperledger also emerged as a leader in Asia, with China’s national blockchain infrastructure, Blockchain Services Network (BSN), a Chinese government initiative designed to support businesses within and outside of China, adopting its technology. Behlendorf confirmed, “BSN will support Hyperledger Fabric as a standard toolkit within the network.”

The project has had a good rapport in China, with help from Baidu, Tencent, and plenty of other Chinese start-ups. In addition, China Minsheng and Merchant Bank have also been users of Hyperledger software, and have sponsored members of the organization as well, even contributing code to the community. From Behlendorf’s vantage point, Chinese companies and government authorities view blockchain technology as a “leapfrog technology” that will enable them to skip whole generations of infrastructure investment and accelerate modernization.

According to Behlendorf, the BSN can be thought of as a digital analog to the Belt and Road Initiative, where the Chinese authorities are looking for ways to accelerate the adoption and standardization of blockchain technology by coordinating efforts amongst the Chinese cloud computing companies, as well as between major companies in the financial services space and government agencies, to achieve this.

Behlendorf believes that China is aware that for networks to be successful, they have to reach beyond China to other countries, and those other countries won’t want to use a blockchain if the perception is that it’s centrally controlled by the Chinese government. He dismissed this concern, stating, “I’m hopeful that the BSN will modernize, or more appropriately, routinize the adoption of blockchain technology in China, as well as every country China does business with.”

With the world in lockdown, it has rapidly become more digital. One of the upshots of the COVID-19 pandemic was the increased rate of innovation within the blockchain arena.

One example, Behlendorf noted, was the Trust Your Supplier network built by IBM, which was implemented very quickly to help validate the providers of personal protective equipment. At the beginning of the pandemic, there were big issues with supply chains, such as the sourcing of materials across borders, things being delivered that weren’t what they were promised, and payments being made before product received. Supply chain traceability could solve these problems, so Trust Your Supplier and others jumped in to remedy the situation. As Behlendorf said, “the need for verifying the integrity of the sources of goods only has increased in importance since COVID hit.”

He went on to describe another area of the blockchain space that has begun to take shape of late, namely the novel application of a digital identity to fight against COVID. The idea is to have a digital credential for immunization or to prove that an individual has been tested negative for the virus. Several companies have started experimenting with digital identities backed by blockchain technology. Behlendorf stressed, “No one wants to build a big central database of who has COVID or who’s been immunized, because even immunization records are considered personal, private information. Folks are asking if it’s time to finally digitize that yellow passbook to make it easier to apply for visas, or to eventually make it easier to cross borders and to give countries a better sense of who is entering their country, and whether they can trust that the disease will be mitigated.

Behlendorf is currently serving on the Technical Advisory Committee of ID 2020, which is focused on digital credentials for immunizations and other social services in developing and under-resourced nations. There is interest as to whether the same technologies could be applied to COVID-19.

Of course, ideas like digital identities, especially on a centralized blockchain, have given rise to a number of fears and prominent conspiracy theories, including the popular theory that Bill Gates engineered the pandemic as a means to forcibly immunize and track the population. Behlendorf sees theories like this as likely “state-funded disinformation campaigns” that take advantage of the fear and economic vulnerabilities brought about by the pandemic

Behlendorf had a lot to say about the impact of cryptocurrencies and the effect of a central bank digital currency, such as China’s DCEP (digital cash payments), on privacy rights.

“Cryptocurrency networks deserve a lot of credit for showing how certain things are possible at a scale that no one had shown before. We’ve learned that privacy is really hard to scale. No one has yet demonstrated something that can operate at the scale of even a small country’s currency cash systems in a way that guarantees transactional privacy of any sort. Z Cash and a few of those are very promising, but every approach to increasing scale comes at a cost of decreasing privacy and confidentiality so far. It’s going to be extremely hard to think about coming up with a replacement for cash.”

Privacy issues are a major concern with using bank digital currencies at a retail level. That said, Behlendorf believes there is still a valuable role for the banks to play as protectors of confidentiality, with the most progress currently underway focusing on real-time gross settlement between banks in a given country, as in having tokens flowing freely, where a token is redeemable for one US dollar or one pound or euro. However, the retail applications of digital cash are still in question. China’s DCP, on the other hand, is mostly a response to the rise of Alipay and WeChat pay, where less cash is being circulated.

Hyperledger is continuing to push ahead with its products and they are constantly improving their capabilities. According to Behlendorf, in the last year, Cactus has improved its interoperability significantly. The goal continues to be focused on bringing the community together and promoting open-source blockchain development, and figuring out how to demonstrate to the world that Hyperledger isn’t just a “speculative R&D effort,” but is getting routinized and implemented in a big way by big players.

As to whether he is personally invested in cryptocurrencies, we had to ask. Behlendorf admits he is not a speculator and has only received a small amount of BTC as a gift. Regarding crypto investments, he said, “I’ve played around just to feel like I’m coming from an informed position, but do not feel like that’s a place where my resources or time is best spent.”

Crypto Opinion with Mike Ermolaev: Raghav Shawney from BlockchainPRBuzz on DeFi, Crypto Regulations in India, and Years in the Industry

Crypto Opinion with Mike Ermolaev: Cassio Gusson from Cointelegraph Brazil on Metaverse, Crypto Philosophy, and the Future of Crypto