As for the Robinhood app itself, the investment platform has received an unprecedented volume of downloads in the midst of the Covid-19 pandemic.

After a frenetic start to 2021 in which all time highs were consistently broken for the likes of Bitcoin and various altcoins, the cryptocurrency market slumped to a disastrous May and June that saw sentiment among investors fall to a significant low. Could Robinhood’s IPO go one step further than Coinbase in generating new investor confidence in crypto?

The cryptocurrency landscape is known for its volatility, but the severity of the recent crash has become fairly rare compared to the early history of the cryptocurrency market. Although the entirety of the market peaked at an unprecedented $2.6 trillion briefly in early May, by the end of June it had fallen by over 50% to $1.247 trillion as popular cryptocurrencies like Bitcoin, ethereum and Dogecoin collapsed.

Although we can see that the total cryptocurrency market cap is still sitting above its 2020 figures, the chart above shows the sheer scale in which the market shed its value in a matter of days.

This fall has led to leading cryptocurrencies like BTC and ETH losing much of their impressive price accumulation throughout early 2021, with both coins losing around 48% of their all-time high value in early May this year.

The causes for such a sizable dip are unclear, but appear to be a series of events combining to cause widespread investor fear. Elon Musk Tweeted in May that Tesla would no longer accept BTC payments for its cars, referencing the carbon footprint of the mining process attached to the digital currency.

One key event that some analysts are directly linking to the downturn revolves around the tightening of regulations surrounding cryptocurrencies in China, where authorities are looking to “crackdown on Bitcoin mining and trading behavior” as the nation looks to control perceived financial risks.

Whilst a 50% decline in market capitalization illustrates a deep pullback, it may be difficult to see how an investing app like Robinhood could help to deliver some form of revival. Leading exchange Coinbase filed for an IPO in April 2021 and was caught up in the crypto downturn. 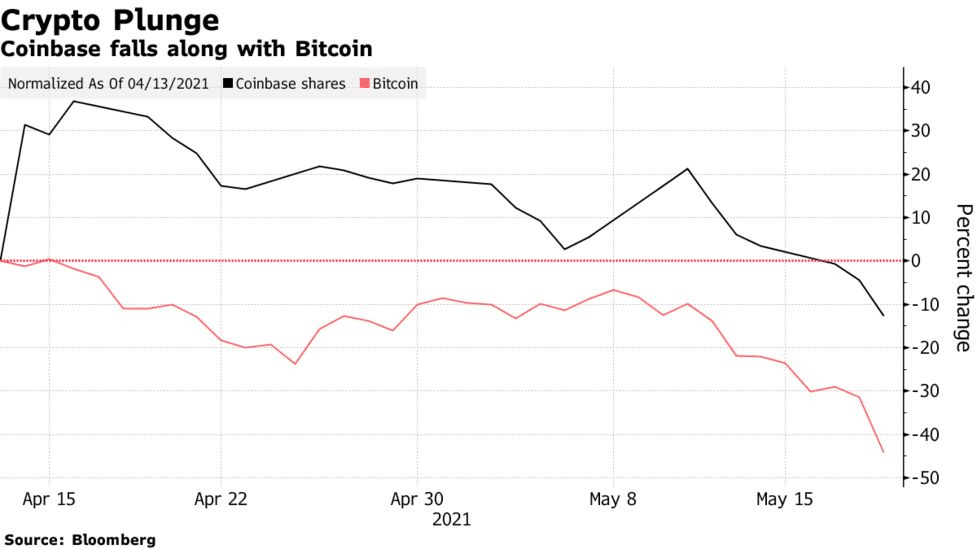 As we can see from the chart above, Coinbase’s value has almost precisely traced Bitcoin since its recent listing. Despite the stark accuracy of how both assets operate, this should come as no surprise considering BTC’s market dominance and Coinbase’s dependence on crypto.

However, in the case of the Robinhood IPO, things are likely to be a little different. Let’s take a deeper look into how the world’s favourite up and coming investing up could pave the way for some long overdue market optimism to the crypto landscape.

The Return of Meme Investing

The influence that Elon Musk holds on the crypto market is stark. Although the latest downturn was driven in part by Musk’s announcement that Tesla would no longer accept BTC, the world’s richest man has also been responsible for sizable rallies in the past – particularly for the meme-based cryptocurrency, Dogecoin.

The very announcement that Elon Musk was set to appear on Saturday Night Live in May 2021 led to such a Dogecoin frenzy that the Robinhood app actually crashed in the build-up to the event.

Having struck a chord with more casual retail investors, Robinhood has often found itself as a strong choice when it comes to meme-based stocks like Dogecoin, and was a key player in the GameStop and AMC squeezes in the first half of 2021 – illustrating the power coordinated retail investors can hold in the face of larger institutional investors and hedge funds. 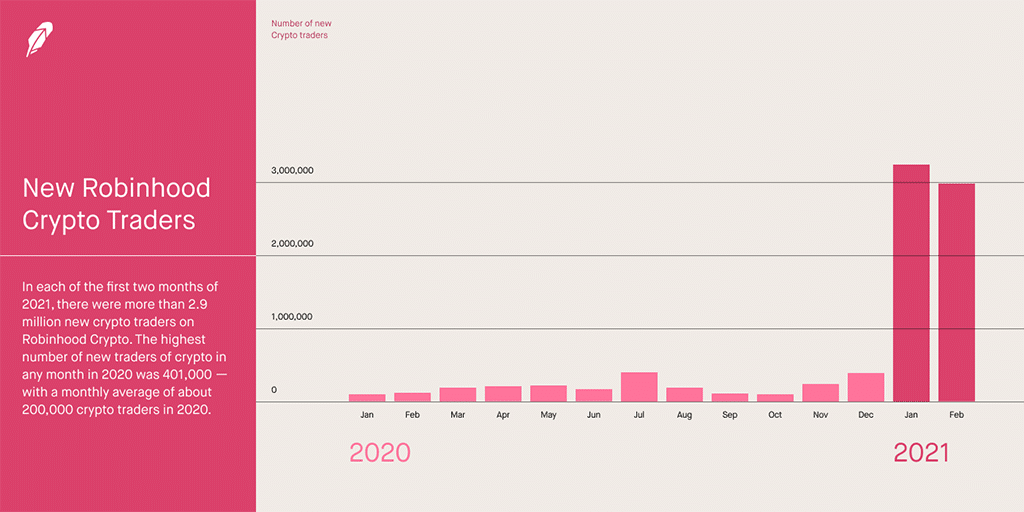 As a platform that enables more traditional stocks and shares as well as cryptocurrencies, Robinhood has been an excellent bridge between retail investments and cryptocurrency trading. In fact, according to the app’s own figures, crypto investments within Robinhood have shot up from an average of 200,000 monthly traders across 2020 to over 3 million in January alone – with February also posting some impressive figures.

This shows that Robinhood has the potential to welcome a new wave of retail investors looking to embrace the cryptocurrency landscape and purchase tokens like Bitcoin or meme assets such as Dogecoin. The app’s IPO may well represent a much larger step towards crypto acceptance than it first appears.

The Rise and Rise of Robinhood

As for the Robinhood app itself, the investment platform has received an unprecedented volume of downloads in the midst of the Covid-19 pandemic. Whilst the health crisis lead to uncertainty across a range of industries, government stimulus packages have paved the way for a much larger investing community to turn their hand to stocks, shares, and crypto. 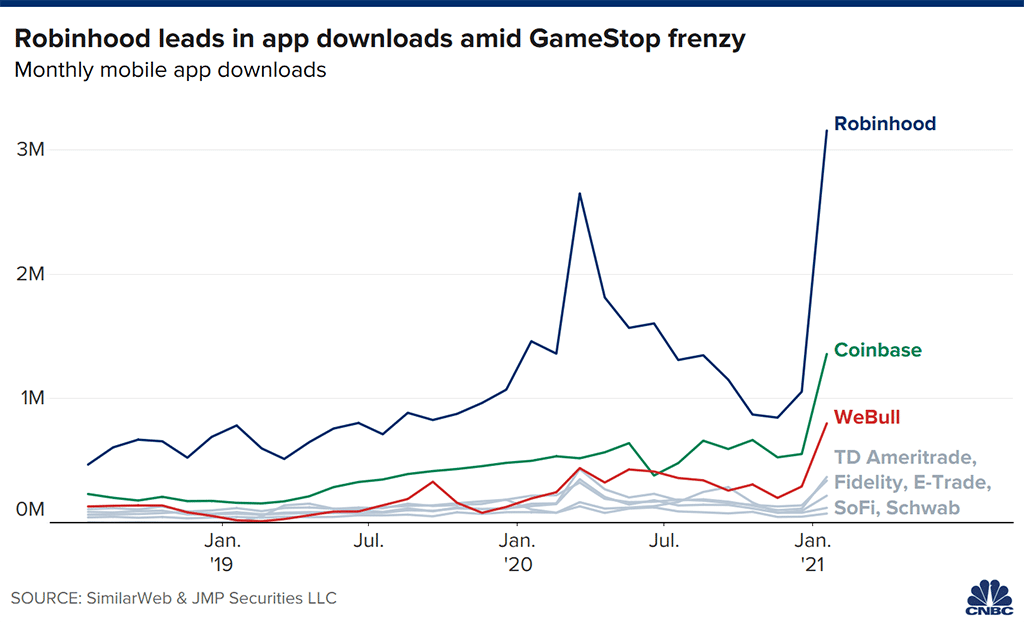 According to Maxim Manturov, who is the head of investment research at Nasdaq-listed online brokerage firm Freedom Finance Europe, the pandemic has driven growth across investment platforms across 2020 and 2021.

“As per Fidelity report, there were 26M retail accounts in 2020, i.e. up 17% compared to 2019, while the daily trading volume doubled. People in the US traded about 90% more stocks than the week before they received their stimulation funds,” Manturov said.

“Finally, a survey by Deutsche Bank, which included 430 retail investors, showed that the respondents were going to invest, on average, 37% of all their stimulation money into stocks. Goldman Sachs recently raised its expectations for stock demand by retail investors in 2021, from $100B to $350B.”

Such impressive figures make it clear that Robinhood has rapidly grown in popularity alongside much of the investment market in welcoming new retail investors. Now, with what may be a significant buying opportunity in the crypto landscape and a much-anticipated IPO about to kick off, Robinhood’s timely flotation may lead the way for some much-needed new investment into cryptocurrencies like Bitcoin and Dogecoin.

Dmytro Spilka is a CEO at Solvid and founder of Pridicto, a web analytics startup that uses AI and Machine Learning to forecast web traffic, monitor vital metrics and set visual traffic aims. His work has been featured in various publications, including Tech Radar, Entrepreneur, Huff Post, The Next Web and ReadWrite.

How The Qualities Of Bitcoin Baffle Nocoiners

Was Aristotle a Bitcoiner? – Bitcoin Magazine

Bitcoin Lets You Live Wherever You Want