An imminent downtrend occurred in the Bitcoin network after breaking the record in mid-April by reaching highs of $64.8K.

This price drop has been partly orchestrated by Elon Musk tweets about Bitcoin’s impact on the environment, as well as China’s ongoing crypto mining crackdown.

As a result, the average Bitcoin trader has been on the receiving end as their returns have nosedived to a 14-month low, as revealed by Santiment. The on-chain metrics provider explained:

“Bitcoin may still be up significantly compared to 2020 prices, but through all of the FOMO, top-buying, and bottom-selling, the BTC network is at its lowest average trader returns in 14 months. This historically is a better than average spot to buy.” 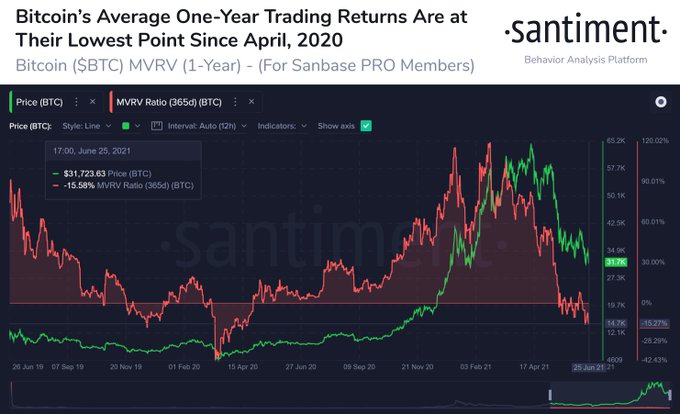 Santiment attributed the loss witnessed by BTC traders to FOMO (fear of missing out), bottom-selling, and top-buying. This has been the opposite of profitable traders because they usually buy the low and sell the high.

Institutional appetite is drying up

According to data science firm IntoTheBlock:

“On-chain data shows a lack of institutional appetite. Bitcoin has experienced a dramatic slow-down in on-chain activity, as the total value transacted in USD above $100K has seen a decline of 61.7% compared to the recent highs set in February of this year.”

On the other hand, the deadlock stuck on the BTC network is caused by long and short-term holders, as disclosed by William Clemente III. The on-chain analyst noted:

Therefore, indicators showing that long-term BTC holders are buying, whereas their short-term counterparts are selling.

Meanwhile, some crypto experts believe that Bitcoin mining might become more accessible and lucrative due to China’s restrictions.

They noted that BTC miners who remain active post-China’s crackdown are expecting to be more profitable, given that once more miners away from the Bitcoin network, fewer computational guesses per second are needed to find the mathematical solution.