BTC has been consolidating between the $30K and $40K range for more than two months, although it nosedived from an all-time high of $64.8K recorded in mid-April. Furthermore, the leading cryptocurrency recently dropped to lows of $28K as China’s crypto mining crackdown intensified.

Market analyst Michael van de Poppe believes that the renewed upward momentum in the BTC market will be sustained if the area between $32.2 and $33K is strong enough to support. He explained:

“I find the level around $32.2-33K extremely important to sustain as support. That would generate a higher low & strength towards further upwards momentum.”

Michael van de Poppe had previously stated that if this area holds, the next level to be hit will be $38K.

His sentiments were recently echoed by another trader, who noted:

“If Bitcoin doesn’t fall below 32K within the next 48 hours, We are probably to rise sharply to 39K and 42K Zone.”

“Imo this chart is the easiest way to visualize what’s taken place over the last month under the hood. Strong hands have added increasingly through the recent price decline, now offsetting selling from weak hands. Now we wait for reaccumulation to complete – seller exhaustion.” 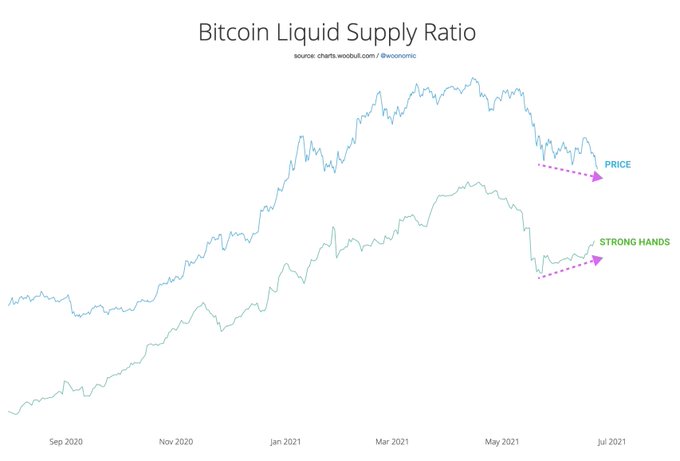 Strong hands are investors who hold Bitcoin for the long term, whereas weak hands hold it for the short term.

Clemente III had previously pointed out that the deadlock stuck on the BTC network was being caused by long and short-term holders. He acknowledged that long-term holders had bought an additional 579,940 BTC in the past month, whereas their short-term counterparts had sold 521,983 BTC in the same period.

Despite the attacker borrowing 100 million BEUR